I don’t like to get too political here. Why? Because I have enough stress in my life, I don’t need randos on the internet telling me what I think and why I’m wrong in an aggressive manner. If people were more polite, engaging in thought-provoking discourse rather than slinging whatever awful words first pour from their mouths, I’d consider it. Sure, I broadly discuss things without the intention of convincing people to think like me. I don’t

Today may be the day that I change that. Yesterday, we received our election year booklet of information: the Massachusetts Information for Voters booklet. The one that discusses what’s going to be on the ballot and the for and against arguments for each question. While I keep debating whether or not I’m going to do a series on these with my opinions (OPINIONS, not facts. These are 2 very different concepts.), I had to say something about Question 3:   A subject that I feel very passionately about and will stand up for every single time.

To brief people who may not be aware of it, Question 3 addresses Transgender Discrimination (rather, Anti-Discrimination). Unlike most questions, something that I think was made to confuse voters purposefully to deceive them, a “Yes” vote actually leaves the current law alone. The “No” vote undoes a very important piece of this law: prohibiting discrimination against Transgender individuals. In short: If you feel as though people should use the bathroom for the gender they identify as, then you want to vote “Yes”. If not, you want to vote “No”.

I know how I very clearly stand on this topic, so I could have utterly convinced someone who doesn’t agree with me to vote a certain way through misleading text. Instead, I clearly expressed that “Yes” keeps the bill as is, while “No” repeals this anti-discrimination section. See? I did it again.

If you have followed my blog, you know how I stand on the issue. (See: It’s All About the Bathrooms) I’m very much pro-itsnoneofmydamnbusiness. If no one is getting hurt and it doesn’t have any effect on me, I really don’t even think about it. Am I pro-life? Absolutely. Would I get an abortion? Not a chance because it’s not something that I could do unless there was some very extreme circumstance. Will I judge someone who does? Absolutely not. It’s not my business. I support the right to choose because I thought that being American, you had freedoms or something. 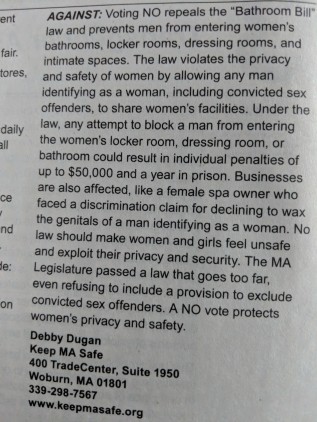 I bring this up because I did the responsible thing. I read the booklet. I read the laws in great detail. I closely read the for and against arguments to help. I have never, ever had the reaction that I did when I read the “Against” argument for Question 3. Yes, I have included it here. I was incredulous. Stunned. Normally the arguments are articulate, straightforward about facts. This was hate and fear mongering. The “In Favor” argument was dripping in sarcasm, saying phrases that I would have used like “Sexual assault is already illegal”, “lets transgender people use the bathroom, which we all need to use”. I’m in complete awe over this “Against”. Complete. What does waxing have to do with using a bathroom? If a person doesn’t feel comfortable waxing a body part on another person, that’s their choice. See, freedoms. I don’t understand what that has to do with a trans woman sitting in a stall, doing their business while minding their own business.

First of all, I’m pretty sure a sex offender doesn’t care about things like “laws”. Otherwise, they probably wouldn’t be on a sex offender list. Unless they weren’t caught. Unfortunately, there are no “sex offender” only bathrooms. They do know that men/women can sexually assault people of the same gender, right? So this law wouldn’t affect that. In fact, had an incident happened where a trans woman assaulted another woman in the bathroom, I’m sure it would have gone national as a way to show just how dangerous transgender people who need to pee really are.

I have made this argument before. Should there be “LGBT” bathrooms, ones that are separate but equal? That is something that has worked very well in the past and I’m sure we should seriously consider this. (Total sarcasm, in case you didn’t get that.) Obviously all transgender women are into women since men can only be into women, so this is a very serious issue. Since that’s the case, maybe lesbian women shouldn’t be in the bathrooms with straight women either because who knows what’s going to happen. They may share… lipstick. The horror! Can you catch trans like you can catch gay, through touch or a fabulous shade of red lipstick?

I will fight for people to live their lives in a peaceful manner every time. I fully support the LGBT community. I fully support my friends and family within it. I’m voting “Yes” on Question 3. I don’t care how you vote; I just want you to be aware of facts not someone telling you scary (and ridiculous) stories for the intention of deceiving you based on their own personal bias.